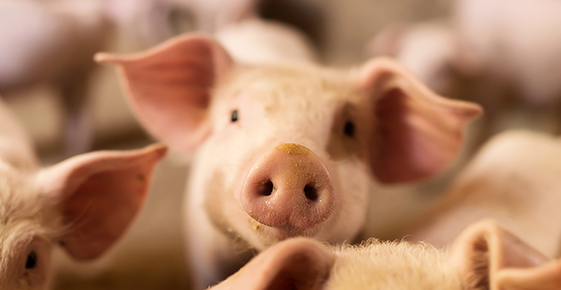 The H1N1 or swine flu epidemic has many people concerned. It certainly holds the potential for severe, worldwide disease in humans. Currently, most cases in the U.S. have not been as serious as in other countries. Flu viruses commonly mutate though, and even a small mutation could increase the pathogenicity to critical levels for both animals and people.
Swine influenza virus has been found worldwide in birds, including chickens and waterfowl, humans, and pigs. It does not cause disease in dogs and cats. People that own pet pigs, including pot-bellied pigs should be concerned. As of May 2009, there have been no reports of disease in pigs in the U.S. as a result of the current outbreak, but there is one report of a person who vacationed in Mexico, returned home to their swine farm in Canada, where their pigs developed flu symptoms.

Swine influenza is a highly contagious disease spread by direct contact, airborne respiratory secretions, contaminated objects, or people moving between swine herds. Bringing home a new pig is a common cause of disease outbreak, which usually happens in one to three days. Infected pigs may shed virus for seven to ten days. A carrier state may exist for up to three months. Recovery from disease can cause a limited amount of immunity.

The treatment is supportive: medications to reduce the fever, and keeping them clean and warm. Pigs with more severe disease may need IV fluids and antibiotics.There are several commercial vaccines available for influenza in swine, but none of the current vaccines are effective for this type of influenza. The virus is easily killed by disinfectants.

The best method to try to prevent influenza in your pet pig is to use management practices to decrease the chance the pig will be exposed: limiting visitors, quarantining new pigs, and disinfecting things that could be contaminated.

In summary, there are several different types of influenza viruses. Human influenza, avian flu and swine flu viruses are all closely related; each has the potential to infect one of the other species, sometimes with devastating results. This H1N1 virus from swine has mutated to make it easier to infect people. With more time we will see if it becomes more virulent in people and how significant it is in pigs.

We look forward to hearing from you